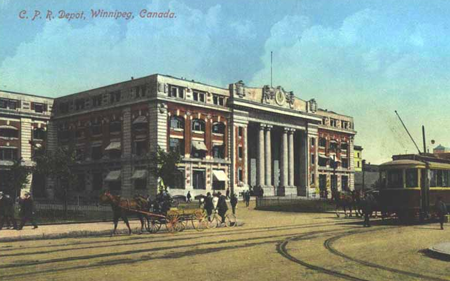 The building that is now Neeginan Centre, was the fourth depot built by the Canadian Pacific Railway (CPR) since the construction of the main line through the Manitoba capital in the early 1880’s.  Construction began in 1904 and when the station officially opened in May 1905, it was the CPR’s most opulent and grand facility.  For many years it was the hub of activity in a booming Winnipeg.

However, changes in the railway sector, and the loss of Winnipeg’s primary position in Western Canada’s economy, would cause a slow decline in the use of the facility.

In 1978, the newly-formed VIA Rail took over all passenger railway service and chose Union Station at Main and Broadway for its passenger depot.  This virtually ended public use of the CPR station, and by the late 1980’s most of CPR’s office staff had been relocated.  The building remained vacant until the Neeginan Centre gained control in December 1992. 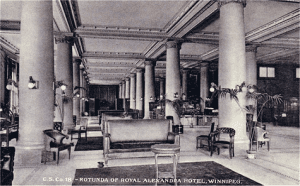 November 3, 2005 marked the 100th year of the CPR Station.  A celebration including a “Centennial Plaque Ceremony” was held at Neeginan Centre to mark the occasion and, on behalf of the Aboriginal Centre of Winnipeg (ACWI) Heritage Corporation, we would like to thank all sponsors, organizations and individuals for their generous efforts in making the Centennial Celebration a success.

Your commitment to helping the ACWI Heritage Corporation promote and maintain the historical integrity of the former Canadian Pacific Railway Station is greatly appreciated.

Neeginan Centre is located at:

For directions or any general information regarding the Centre please contact: